AHIMSA: Buddhism and the Vegetarian Ideal

AHIMSA: Buddhism and the Vegetarian Ideal 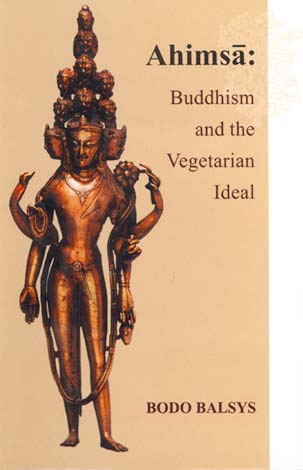 Ahimsa is an inspiring and enlightening book, food for thought for any practicing Buddhist or anyone who is interested in becoming a more compassionate being. As Buddhists and Bodhisattvas we must meditate on the effects of every action and thought we are involved in if we are to resolve all Karma and act with true all embracive compassion for all sentient beings.

Ahimsa is an urgent edict to Buddhists to practice the wisdom and compassion they earnestly espouse through abandoning their addictions to a flesh-based diet and adopting the loving, ethical, healthy and karmically-free practice of vegetarianism.
$15 — PURCHASE FROM SHOP
As bodhisattvas (and aspiring bodhisattvas) the action of eating flesh is antithetical to their vow to liberate all sentient beings from suffering. Instead of enchaining beings to suffering, the writer urges with inspiration and compelling argument, that it is vital that Buddhists abandon this hypocritical action hence eliminating unnecessary suffering from this world.

With skilful creativity the author untangles the convoluted and diverse knots formulated by Buddhists trying to justify meat eating. Loosening these binding threads of karma he responds with modern, compassionate logic clearing away the debris of outmoded and desire-laden thinking. Responding to the Tantric Buddhists who tend to scoff at the apparent attachment to duality and phenomenality that vegetarianism apparently represents, he says “but could he do so if it was direct poison that was offered to him to be eaten?”, the writer questions. “ Which is the greater attachment, an aversion to meat, or gross desire for its flavour and aroma?” For the Hinayanists and Mahayanists he reinterprets the Jivaka Sutta, wherein it states “that in three cases meat must not be eaten: if it has been seen, heard, or suspected that it was intended for the person”. The realities of supply and demand inevitably means that if one eats meat another will kill animals in order to sell it to you, indirectly or otherwise. “Thoughtlessness indeed, thinking that a butcher is a Buddha absolving them from their sins.” He speaks to those who state “there’s not much point to vegetarianism when one considers the number of insects, slugs and snails that die in the processes of agriculture.” “Pigs scream as they are killed. Does a slug do that? A terrified calf rears at the stench of blood and death in its nostrils. A lamb bleats madly as a man applies a knife to his throat. You don’t hear the screams of snails, or plants, as they die, because there are no throws of their suffering, for they do not have the vertebrate nervous system that allows them to experience such pain”. The excuses continue and so too the intricate detangling of the labyrinth of justification for meat consumption by Buddhists.

The modern world is in dire need of exemplary Buddhists, practicing what they are preaching, and being true bodhisattva saviours to the world by educating and acting in ethical, wise and compassionate ways. As the writer explains, the role of bodhisattvas & aspiring bodhisattvas is changing in the 21st century and it is no longer permissible for them to be ignorant of the planetary effects of harmful practices. Vegetarianism is the case in question and the writer defines with emphasis the urgent need to rectify the harm caused to the human, animal and plant population of the planet through this practice. With so much suffering inflicted, how could any bodhisattva not be striving to eradicate this practice from the world at large?

Read the book and be equipped to defend the compassionate practice of vegetarianism, or think more deeply as to whether or not the logic you have been taught and the advice you have been given is logical, ethical and karmically beneficial for you, the planet and all sentient beings therein.

From the inside cover: Ahimsa means ‘harmlessness’, carried out in thought, word or deed. A major precept of Buddhists of all denominations is to practice harmlessness. Such activity is not supposed to be theory, but a practical fact, a sacred pledge (samaya) integrated into the fiber of one’s every mode of conduct on the path to enlightenment and liberation from the samsâra. However, as this text elaborates, all good intent along this line falls flat in the light of the practice condoned by many Buddhists of meat consumption. Harm is thus caused to the animal butchered, to the consumer of the flesh, and to the environment we live in. It is also a decidedly gross act of adharma (non-dharma) to all in the society wherein the Buddhist practitioner that consumes meat and animal products resides, as clearly explained in this book.

It is time that Buddhists everywhere wholeheartedly spurn all considerations of meat toxins in their bodily environments, to actively espouse the cause of true harmlessness in all that they do; and to act as true Bodhisattvas in training by teaching all how to be compassionate through not killing or harming their animal brethren. The reasons are clear as to the way to be truly compassionate, as all Buddhists should be. Read, learn, observe your true motives in everything you do; desist from harmful actions, and thereby grow and become Bodhisattvas and Buddhas at the end of it all.

You can read Chapter 1 of Ahimsa: Buddhism and the Vegetarian Ideal here. It also has the index included so you can look at other chapter titles.