Karma and the Rebirth of Consciousness

Home/Buddhism, Healing, Karma, Publications, Vegetarianism/Karma and the Rebirth of Consciousness
Previous Next

Karma and the Rebirth of Consciousness 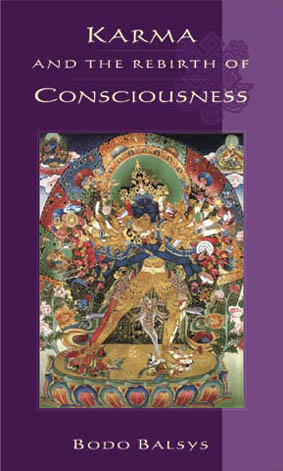 The nature of the karma that governs all phenomenal appearances in the three worlds of the samsâra is examined in this book. From basic understandings of karma, the book proceeds to expound the subtle intricacies of the mode of manifestation of all aspects of this basic law. Karma and the Rebirth of Consciousness shows that many traditional beliefs about karma are simplified “truths” that had their genesis in the infancy of humanity’s ability to logically enquire. Bodo argues that Buddhists have failed to rigorously query some of the illogical articles of these traditional teachings, but rather have asserted a near adamantine faith in traditional writings based upon a belief in their infallibility. Consequently many simplistic elementary beliefs now constitute the framework for their understanding of karma.
$25 — PURCHASE FROM SHOP

In chapter two Bodo gives an analysis of skhandhas and samskaras (past life tendencies), giving further explanation than has hitherto been done. He then provides persuasive and perceptive arguments refuting the concept of human rebirth into animals. To consolidate this he gives a quirky story concerning Buddha’s foremost disciple Ananda’s hypothetical life as a frog, which ponders the various philosophical conundrums raised by such a hypothesis. He later goes on to explain and elaborate upon Gampopa’s Jewel Ornament of Liberation, in particular providing a modern commentary on the Ten Virtuous and Non-Virtuous Deeds. This itself forms a useful ethical handbook for modern practitioners and a useful tool on the path of enlightenment. This book provides a unique and comprehensive explanation of how the concept of karma and rebirth works, offering unique and sophisticated insights into the significance and manner of this most important mechanism.

*You can hear Bodo give an introduction to Karma in the foundation series area of the web. *