Home/Teachings/Hierarchy/Shambhala and Hierarchy Illustrated
Previous Next

To become residents of Shambhala is a natural goal of all who are following the way of the Bodhisattva bhūmis, whilst the highest bhūmis necessarily incorporates residence at Shambhala. The entire process of meditation therefore eventually prepares one to bear the high potencies of the energies and visions that one will receive from this source once the grounding of tensified manasic substance has been achieved. 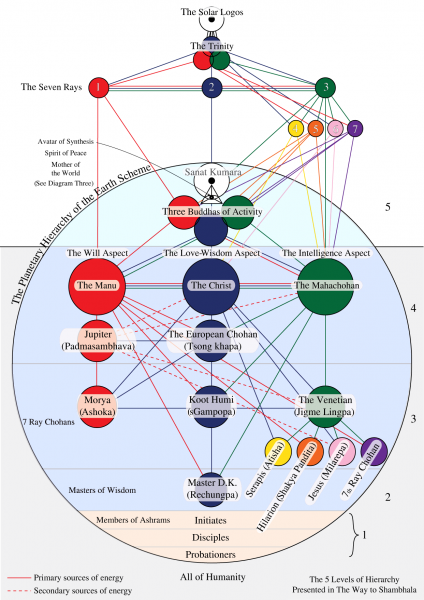 We can present five levels of expression to Shambhala, consisting of different maṇḍalic constructs. Again one can see the qualities of the five Jinas exemplified. These levels are composed of the various gradations of Initiates.

1) The lowest, broadest level is constituted of third and fourth degree Initiates, who form the executives within the Ashrams of the masters of Wisdom. They embody the subray departments constituting the Council of Bodhisattvas, the Hierarchy of Light and Love. Each such grouping can be considered as a chakra of twelve petals centred around a particular Master of Wisdom (an Initiate of the fifth degree), to which then there are a number of subsidiary petals.

This grouping comes under the auspices of Amitābha’s Wisdom of Discriminating Inner Vision. They represent the enlightened members of the kingdom of the Sambhogakāya Flower, those who are in the process of obtaining their final release from that kingdom, and those that have done so. The domain of the abstracted Mind is still their focus and consequently they reflect Amitābha’s purpose into manifestation.

2) The next level constitutes the maṇḍala of the Masters of Wisdom, the Initiates of the fifth degree, thus function at the lowest level of expression of the dharmakāya, which they express into saṃsāra according to the nature of the particular sub ray whose purpose is held in their custodianship. There are presently around 22 individuals that have made the grade.

Here we have the demonstration of Ratnasambhava’s Equalising Wisdom for our planetary manifestation. They work to harmonise all lesser spheres of activity into the one primal mode that is their directive from the Lords of Shambhala. The developed will-to-good is utilised for to direct planetary purpose along their respective Ray lines far into the foreseeable future. All is amalgamated into the variegations of the Shambhalic and Hierarchical maṇḍalas of which they share a common vision and Plan.

3) Then we have the maṇḍala of the eight Mahabodhisattvas explained in Cellular Consciousness. They are the Chohans of the pure Rays, plus the Mahachohan occupying the northern position of the maṇḍala. These are representative of initiates of the sixth degree, the degree of attainment of the Buddha when he gained his parinirvāṇa. Consequently they have attained the rank of Buddhahood, but are still actively engaged with earth affairs.

Their united work corresponds with the functions of Amoghasiddhi’s All-Accomplishing Wisdom, for they manifest all power over every attribute associated with their Ray lines and the dissemination of Shambhalic purpose into manifestation along these Rays.

4) Next we have a interrelated hexagram of high Initiates, all of whom have attained the rank of Buddha, of which the historical Buddha is one. This grouping takes on the functioning of Akśobhya in that they mirror the high commands from Shambhala and from cosmic sources into manifestation. They express the cyclic activity of the All-seeing Eye from all directions in space and cosmic centres into our planetary sphere. Thus all the chakras below the planetary Head lotus come to be vitalised with active purpose and reactive energies. This grouping is constituted of Initiates of the seventh and eighth degrees.

5) Finally we have the symbol of the Eye in the triangle, surrounded by a diamond of Great Ones, that represent an inner executive Council of Shambhala. They are Initiates of the ninth and tenth degrees (or greater), making them Heavenly men in cosmic spheres. They function at the highest level of dharmakāya.

This is the source of all Shambhalic dictates governing all planes of perception, and of all links of our planetary system with their correspondences in the solar system and throughout cosmos. They therefore take the attributes of Vairocana with respect to the dissemination of spiritual power into the domains of the earth. 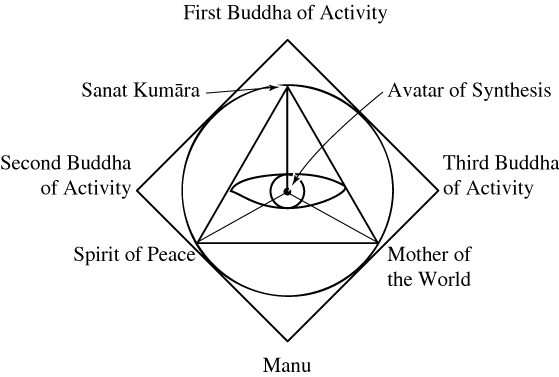 Text from The Way to Shambhalla Chapter 5